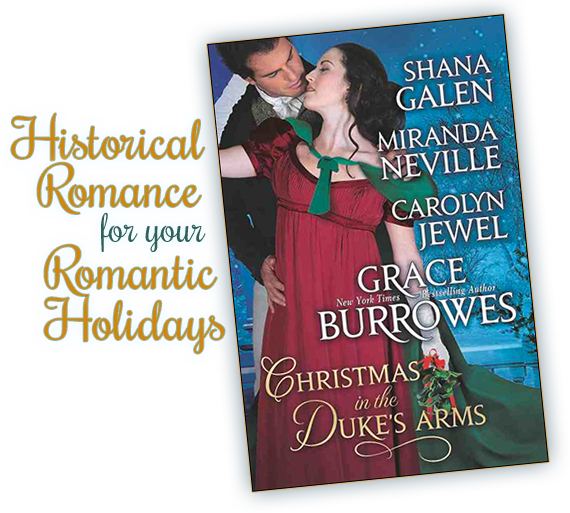 Christmas in the Duke's Arms

An anthology featuring these Regency novellas:

"A Knight Before Christmas" by Grace Burrowes

"In the Duke's Arms" by Carolyn Jewel

"The Spy Beneath the Mistletoe" by Shana Galen

These yuletide tales are set in rural Nottinghamshire and feature couples who dream of holidays filled with true love, however unlikely that might be. A highwayman, a cozy country inn, a Christmas assembly and copious bundles of mistletoe contribute to merry, romantic holiday happily ever afters.

Robina has been expecting a proposal from Wyatt, Lord Carbury for some months but his courtship has left much to be desired.

Carbury stood in the middle of the room, the very picture of a man approaching the height of his powers. At thirty-three, he had filled out from the reed-like slenderness of his youth. He was broad-chested beneath his perfectly cut dark blue coat and strong without an ounce of excess fat, from his firm chin down to his trim waist and muscular legs in fitted buff pantaloons and Hessian boots. His brown hair was short and neat. Neither fashionable excess in his coiffure nor a hint of bristle on his firm chin and jaw was allowed to mar the regularity of his features. He wasn’t excessively handsome, merely a fine-looking English gentleman with all the arrogance of the breed.

Nothing in his expression spoke of the apprehension that should be felt by a man who had just offered marriage to the lady of his choice. He seemed to feel as much anxiety as he would about eating breakfast. And why not? Obviously, in his mind her acceptance was just as sure as his cook’s preparation of the morning meal. He likely expected her to feel gratitude, and with the sensible side of her brain, she acknowledged the logic of his position. Another part of her head, one linked to her heart and other sentimental organs, protested. 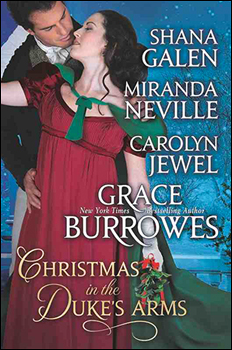 “Was that a proposal of marriage?” she asked.

“I thought it was more along the lines of a command.”

“Come, my dear Robina. We have known each other too long, and we are both far too sensible to indulge in romantic postures. I know we shall deal very well together, and I cannot believe you do not think the same.”

“But why? And don’t mention our fathers, please. Let us stipulate that there is no obligation. I am not your duty.”

“I beg to disagree. I have thought about the subject, and it’s clear to me that the best way to ensure your future is to make you my wife. Only thus can I look after you as my conscience demands.”

“And what if your conscience and my wishes lead us on different paths?”

“I find that hard to believe. I am sorry if you are piqued at my silence in the months you’ve been in London. I am a very busy man. Nevertheless, you deserve an apology for the inadequacies of my courtship. Pray forgive me and trust that I will not be as inattentive a husband.” He didn’t sound even remotely sorry.

When Robina was seven years old, she had escaped her governess and climbed an apple tree. She had amused herself attempting to toss unripe fruit into the gardener’s water trough and made great strides in accuracy when Wyatt strolled through the orchard on his way to a neighborly call on the Westons. Without a by-your-leave, he’d lifted her down from her perfectly secure perch on the widest branch and gravely scolded her, not for wasting fruit, which would have been reasonable, but for endangering herself. He completely ignored her protests that she was an expert tree climber. Wyatt Herbert had been an insufferably interfering fifteen-year-old, and the tendency had only grown as he aged.

She pursed her lips, sealing in words unbecoming of a lady. Carbury seemed to take her silence for encouragement.

“I respect you too much to doubt you see the advantages of my offer. For my part, I know my duty, and I trust I will never shirk it.”

Shirk was an ugly word. “If you think you need it, I give you my permission to shirk your duty to me. I never asked for charity, and that is what your proposal is.” The reins on her temper slipped away. “You, Wyatt, are a pompous ass. It has never been my ambition to share my life and my bed with a man who treats me with such supreme condescension.”

Miranda Neville
grew up in England, loving the books of Georgette Heyer and other Regency romances. Her historical romances include the Burgundy Club series, about Regency book collectors, and The Wild Quartet. She lives in Vermont with her daughter, her cat, and a ridiculously large collection of Christmas tree ornaments. She is thrilled to finally write a Christmas story in collaboration with three amazingly talented ladies.